The title of this has a “part two” in it. That means there is a “part one” first. So… go check that out before you read this one.

I cannot tell a lie. Initially I was quite intimidated by this whole fermentation thing. Part of my education and even the big fatty test I took to become a dietitian covered food safety. Until I finally purchased a food thermometer, I overcooked meat on the regular, just to make sure I didn’t kill or almost kill anyone. Letting something rot and then eating it just seemed a little too risky for me. I read from numerous places that there hasn’t been one reported case of food-borne illness from fermenting veggies so I repeated that to myself several times and proceeded. 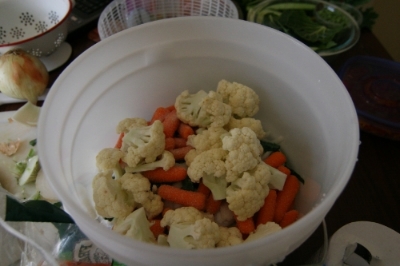 My first batch had cabbage, onions, baby carrots, kale and cauliflower. You can use pretty much whatever you want. I’m not going to take you through a tutorial on this, I’m just going to show you some of my pictures and my experience. You basically chop or shred the veggies, toss some salt on them, squish and mash them down, and add a bit of water if needed. Then you add a weight and cover it. Check out this video to learn now. This guy is the KING of fermenting!!

I used a food grade plastic bucket because but  have since switched to glass, just to be safe. It’s supposed to be OK to use but I did read that it can still leach some chemicals into the ferment.  I started the first bucket in the panty so that I could keep an eye on it but it started to smell so I had to move it down to the basement. It grew the mold layer on the top and that scared me so I just sorta left it down there and kept putting off trying it. Finally one day I skimmed of the mold and pulled out my veggies. Ryan, my boss said that he would taste them first because I was too scared to (hence the avoidance of the bucket) but I summoned the courage to try some cauliflower and it was good!! I excitedly brought some up to Ryan’s office. Success! It was so exciting!! I put them in a few jars and covered them in the brine and we chipped away at it.

My second round I did mostly cabbage, onion, carrots. I added garlic and some hot peppers. This time I shredded them in my food processor.  Taste test? Gooood.I also did dill pickles and dill green beans! They are sooo good! Just the main veggie, garlic, pepper, dill and some oak leaves to help them stay crisp. A big hit here! I wish I would have known how amazing they would be when we had cucumbers coming out our ears! I have always loved dill anything but what’s awesome about THESE dills is that they are packed full of beneficial bacteria! I grew up loving my mom and grandma’s dill pickles. My mom recently informed me that they ones I ate when I was in grade school were all made using this method. They switched to canning later. It was so cool to learn that! Another thing I love about these dills is that the process of fermenting is a hundred times easier than canning. I canned pickles earlier this summer and fermenting takes a fraction of the time. You can do a small jar or a big batch, whatever you have growing or whatever you have purchased. Most canning recipes require a hefty portion of produce. Fermenting is amazing because you can just do one jar if that’s all you want to do! I’m totally sold. Totally sold. 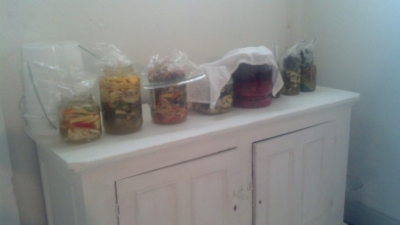