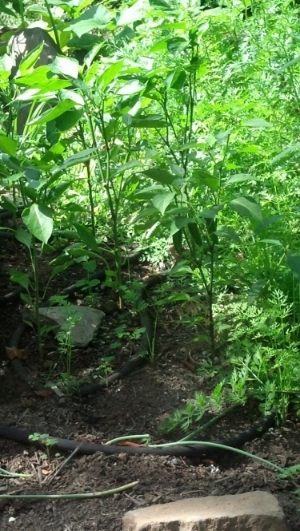 I was just sitting in my window seat  when I noticed I have three jalapeños! I have eight pepper plants, two habaneros, and three jalapeños. Quite the crop! Last year, I had more peppers than I could keep up with! I did get these in a little late but definitely expected better.

I usually plant my veggie garden with a plan for everything. The Roma tomatoes, onions, and peppers were all supposed to be for salsa.  Gill has said numerous times throughout this growing season that there is always at least one thing that just fails and doesn’t do well. She’s so cool and chill about it.   In the past I would have been so disappointed in my meager crop because of the plans I had for it.”Damn you peppers!! You were planted for salsa that was going to be given away with other canned delights at Christmas!” But not this year. I’m taking on Gill’s cool attitude this summer and hopefully forever.

I see a therapist about once a month just to talk about regular life stuff. She is awesome and I think she’s turning me into wonder woman… or at least helping me to fret less over only three jalapeños and live a more mindful life. Really, its kind of the same. Anyway, she is always saying, “And what if… (insert worst case scenario here) happens then what? … and then what would you do? And then what?”  Her “taking it to the end” method and the the garden lesson from Gill have been doing wonders for me. Life isn’t always going to be basil, rainbow carrots, and black krim tomatoes that grow beautifully and bountifully. We will have zucchini plants that don’t produce much (how is that even possible?!) and only three jalapeños. And what if that happens? You buy a few peppers for your salsa and for once you are actually someone who can grab that zucchini that everyone is happily giving away. Life lessons from the garden. You’re welcome.